Openshift is a powerful platform. And sometimes people get overwhelmed when it comes to deployment concepts and building blocks used in the platform.

Red Hat, kubernetes documentation and oc client can help a lot, but it still does not explain all relationships. Honestly, there are very few good documents explaining full scope. And most of them expect you to know the basics. I will try to cover some of the basics here. Just spoiler alert - some of the concepts and relationships changes with each release, new ones being introduced, old ones removed. For sake of simpilicty some of the relationships here is presented in simlified form. Real technical implementation under the hood might be different.

If you type oc types in the CLI you will get an explanation about most of the component. Let’s try cover how they can be used together with other components.

Containers will be one of the main building blocks for your applications. But in the Openshift environment they don’t go alone. If Container is built using good practices, requires few external inputs. It is hard or sometimes even impossible to run it as a single container on your development laptop. You still need some layer of orchestration to do this. Minishift is local development environments to help with this.

As described Pod is a set of containers running on one node. Just to reiterate - pod is unsplittable. This means they are scheduled as one unit and have certain shared resources (mode details - later).

Node is a physical/virtual server, which runs pods. Servers will run some additional processes too (mode about those later). Openshift is a multi-tenant environment. Meaning that your servers become commodity hardware and in the best case scenario you should not care where your application is running, or who is running together on the same node. 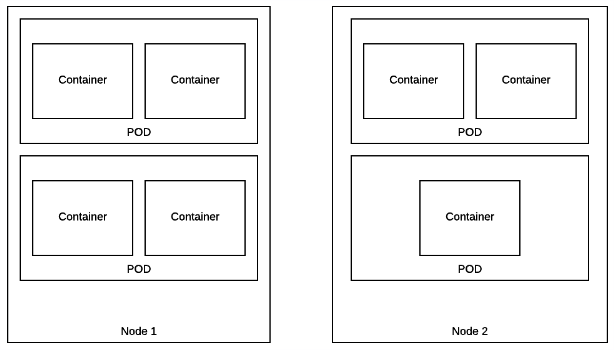 Services is one of the main ways to expose applications. Service’s IP’s addreses should not change during clusters lifecycle. Once you create service object it gets assigned IP and it should stay the same. Usage of IP’s should be avoided and Service Discovery used instead. Services are objects, that enable pods to communicate to each other and external world.

There is few types of Services available. Those can be found by executing:

So to sum-up: ClusterIP - service will get ClusterIP address and work as an internal loadbalancer for your pods. By default ClusterIP is NOT accessible from outside the cluster. (1st picture) Headless Service - Service will work as RoundRobbin DNS and when called will return poll members of underlying resources (in example pods) (2nd picture) LoadBalancer - Works as Loadbalancer and exposes pods to outside world. (3rd picture, right top part) NodePort - Maps to particular PORT on each node. And if traffic reaches ANY cluster nodeIP and particular port - traffic will reach destination pod (3rd picture lower part) ExternalName - allows you to abstract external resources (like dabatase) and show them as objects in Openshift. (2.1 picture) 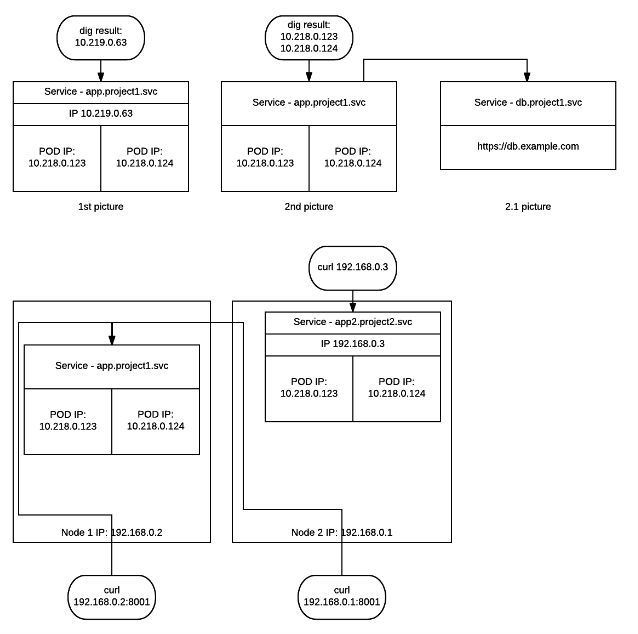 Routes will enable HTTP/HTTPS traffic to reach your pods from outside the cluster. Its simple Loadbalancer, which serves traffic to Services (Based on SNI) 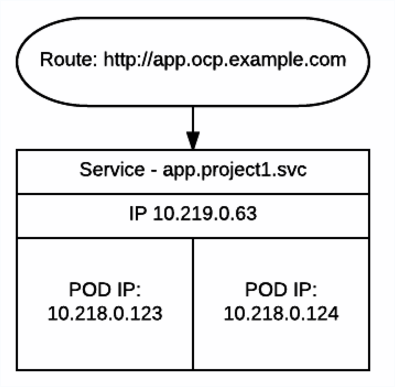 New name - ReplicaSet. It can be seen as a “watcher”. Each time you deploy a pod we describe a state - “My pod need to run 3 replicas and any time. Each time state is not as expected replication controller will try to fix it. If one of the nodes with running pod goes offline replication controller makes sure state is recovered by scaling up pod onto other available node. 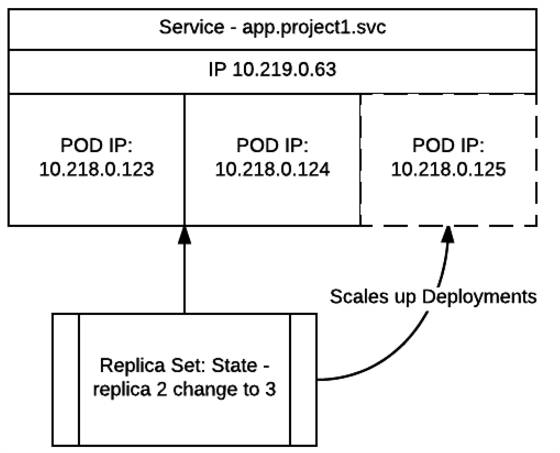 **Now we know basics, let’s look into how to build your applications and relationships betwean those components. **

Image stream is one of the objects you might find difficult to understand if you are coming from Kubernetes world. It’s an abstraction for plain images. It allows more flexible image management in the platform. Best analogy would be soft links for binaries in linux. You can have your main image name, which will never change, and you just change pointers to the images.

BuildConfiguration will be your main tool if you want to build application code. Build is an object, spun from the BuildConfiguration itself. Implementation as you may call it. Builld requires few main inputs: Base Image abstracted with ImageStream, Code from Version control. Final result of the build is output image. 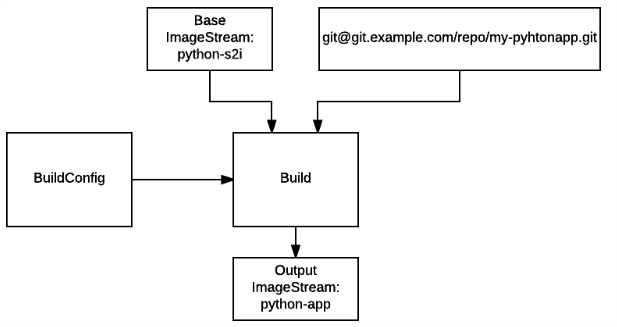 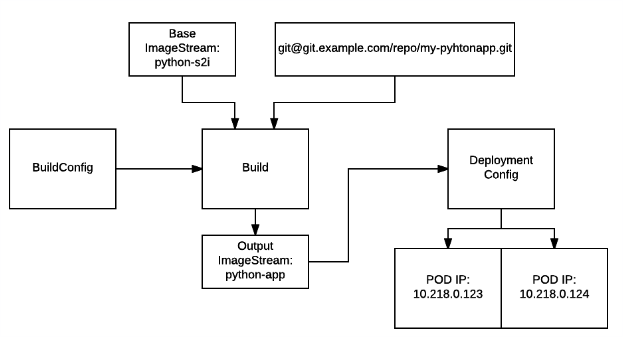 Secrets, Configs, Storage Volumes are just different types of volumes. Let’s see how they can be used. Network storage (in example - NFS) is abstracted using PersistentVolume (PV) and PersistentVolumeClaims (PVC). Administrators usually maintain pool of PV’s and you need to submit a claim to get one. As long as claim exist, nobody else can use the same storage. Where to mount PV’s is defined in the DeploymentConfig. 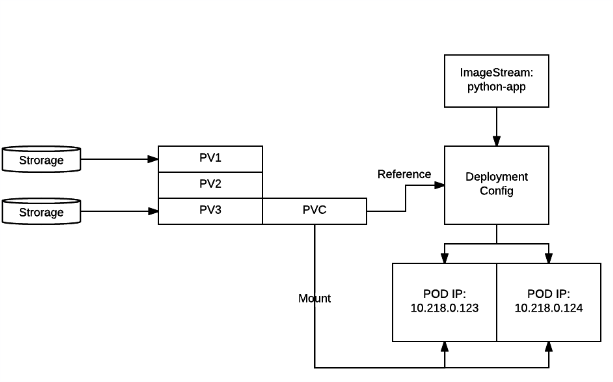 Secret is just another volume. But in this case its is encrypted and resides in the key-value storage. You just put sensitive data into it and mount it as a volume or expose it as environment variable. Secrets are mounted as tmpfs, so as soon as container/pod dies - secret is gone too.

ConfigMap is very similar to Secrets and PV’s. It contains application configuration and is mounted as a volume. The difference between secret and ConfigMap is that ConfigMap is not encrypted.

Self explanatory :) This is how multi-tenancy is implemented.

Labels are the things you will have to get used to. You will need to label everything, and most of the resources are bound to each other using labels and selectors. For example Services and PODs know which Service have load balanace which Pods based on labels. DeploymentConfigs knows which servers/workers pods can be ran on. 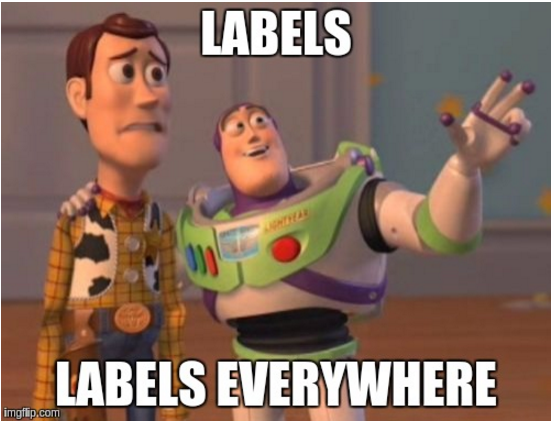 Now some of the other concepts you might find around:

Triggers: Openshift contains multiple options for those. You can set BuildConfig to be executed when new image was published or new code pushed to Git. DeploymentConfig refreshed when Build publishes new image or configuration changes (secret, configmap, replica count, etc). This makes your environment dynamic.

DaemonSet: DaemonSet is very useful when you need to run containers on each node or on the set of nodes. It takes labels and makes sure container runs as per label selector. It is being used to run monitoring agents, log shipping, or any other utilities which needs dynamic scalability based on resources. In example - if you scale number of nodes DaemonSet will make sure new node has an instance of your container running.

StatfullSet: As per Kubernetes documentation:

For example if you spin standard pods you will get random names assigned to them :

This makes harder to orchestrate applications which requires ordering or use clustering methods. StatufllSet makes sure scaling and naming is consistent. For example:

As soon as you scale - my-app-3 will be created. If my-app-1 dies it will get recreated and only after that scaling happens. Applications like etcd, kafka, redis, zookeper can use this concept together with headless services to orchestrate Master elections and master-slave relationships. 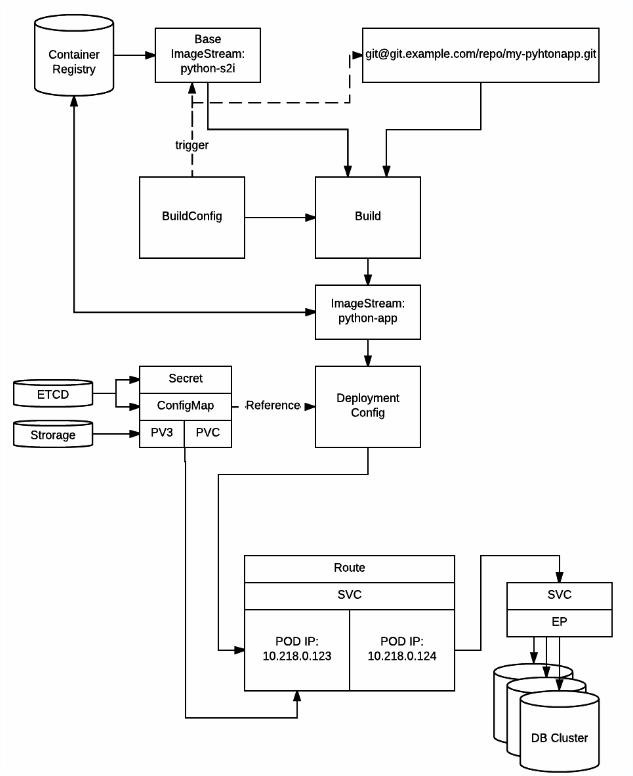 These was just a small insights how the main components relate to each other. And a small illustration how stack of components could looks like (picture above). There are many more components involved and even more coming. In the end you can imagine all these building blocks as a big LEGO game. You take a bunch of them and build something.